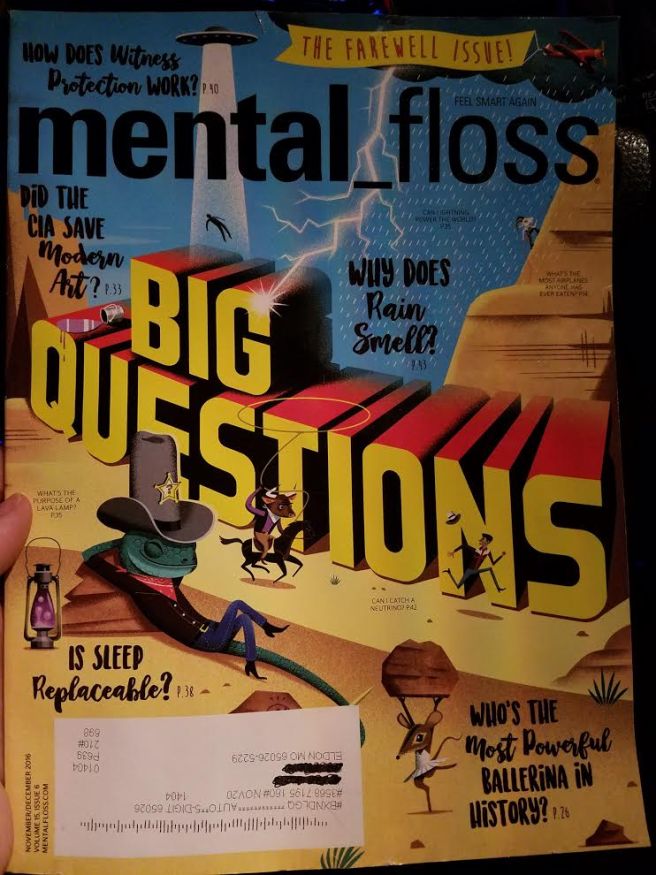 I have some bad news that I doubt many people who read this knew in the first place.

Mental_Floss is shutting down the print side of its operation.

What is Mental Floss?!

Well, I am glad you asked.

Mental Floss is a magazine that brought upon the world in 2001 via Birmingham, Alabama by two college friends named Will Pearson and Mangesh Hattikudur.

It is a magazine for people who love random trivia, like myself.

Every time an issue showed up, it was a good day because I could lose myself for a couple of hours in the many new facts I was learning.

It was rare that I met someone who knew about this magazine, but I have shouted its name from the mountaintops for years.

I am sorrowful to see the print edition go but if you are interested, they sell old versions in the online store, and they have several books they have put out over the years that I guess I am going to have to start buying.

Since this is about the magazine, here are facts from this, the Final Issue.

Did you know that since there wasn’t a lot of edible fish to be found in Quebec, Canada, the Catholic Church classified beavers as fish so the Canadians would have something to eat during Lent?

Did you know that among several other things, a Man named Michel Lotito ate a Cessna Airplane over the course of two years? He ate about two pounds of metal every day.

How many of you thought that English and Metric were the only two units of measurement? Apparently, there are at least four more.

The Smoot is 5’7″, it is the exact size of an MIT Freshman. They used him to figure the length of the Harvard Bridge which is an ear over 364.4 Smoots long.

The Helen is a beauty measurement on the Helen of Troy scale; her face launched 1000 ships, so then a Millihelen will launch one ship.

The Beard Second is the length a beard grows in a second, between 5 and 10 nanometers.

The Sheppy which is about 7/8th of a mile, it is the distance you have to be from a herd of sheep to keep them looking cute.

Richard Nixon said he wasn’t a crook at Disney World.

On the Trobriand Islands in Papua New Guinea, there is a Yam Harvest Festival, and the men are judged based on the size of their yams. Yams are cool and all but the best part of this festival is that the women, married or not, are allowed to have sex with any man they choose in the yam fields as it is believed to fertilize the soil. I think I may have a new place to travel…

Yoda was to, initially, be portrayed by a monkey trained to hold a cane.

Lava lamps would have never hit the market if not for nude films and nudist colonies.

This fact made me think of a short story that Chop’s Guide writer C.E. Manning is working on. Could we Survive on Mars, it looks like we can is we have enough Algae, Microbes, and Bacteria to take along with us to for everything from creating oxygen to growing clothes.

Australia is going to be killing the invasive carp population with herpes.

James Cameron of Titanic fame has traveled 35,756 ft (6.77 mi) to the bottom of the Mariana Trench in the Pacific Ocean; the deepest anyone has been.

If there was a magnet big and robust enough to do so, people could levitate.

Bacteria in the soil is the cause of the smell of rain, so it isn’t the rain at all that you are smelling.

A full head of hair could potentially withstand the weight of 26,500 pounds.

In Connecticut, it is illegal to call a brined pickle a cucumber unless it will bounce after being dropped from the height of a foot.

“Huh” is universal in all languages.

These random facts were all just from one issue of Mental_Floss.

I am going to miss this publication very much.

If you are interested in the things you read in this article, check them out online and on YouTube.

Also… if you are thinking of me this season…

Please let me know how you feel about Chop’s Guide in the comments also what you think about these facts and what you discover visiting Mental_Floss.

The definitive single mens' guide to living the dream of a location independent lifestyle and making the most out of their lives.