My dad and I were spending some time together last week, and while meandering around the Lake, we decided to have lunch at a new joint I have been dying to try out: Kilt and Clover.

Kilt and Clover is an Irish style establishment and so far as I know the only one at Lake of the Ozarks.

It looks like the building was originally fashioned as a Mexican restaurant on the outside but the inside is not only decked out in tons of Irish flair, but it is bigger than I expected.

The owner came and talked to us for a bit and explained what his grand vision was. I asked him if they had any lamb dishes, sadly he said no, but they were in the works, he just needed a good supplier and wanted to make sure everything was made well before offering it to the public.

I am glad he said this because though, it seems most Irish Pubs do not have any now, lamb is something they should carry if they are offering Irish fare.

The waitresses here are all dressed in kilts, and t-shirts and some of them even make it look pretty good which was also a nice feature though sadly not a prominent as I would have liked.

But alas, I am a sad, lonely man who enjoys kilted women… and women in Saris, Punk Rock chicks, Librarian ladies… ok… just attractive women in general… don’t judge me

Our waitress was superb and even impressed dad, who is hard to impress when it comes to restaurants. He isn’t rude but he is impatient when it comes to drinks and the like, and they kept his glass topped off, so he was a happy camper.

For an appetizer, we got something I have wanted to try for a long time but just never nutted up to get them, Scotch Eggs.

I love eggs but just don’t have enough Irish cuisine around to have really had the chance to try them.

Scotch Eggs are basically soft boiled eggs that are then breaded and fried.

And they are fan-fucking-tastic.

These came with a spicy dijon mustard to dip them in, and it was an excellent experience, when I go back, I may get some more.

I am a soup fanatic, so I also felt the need to try soup while enjoying everything else I was having and opted for their version of Irish Potato Soup.

Their soup only comes in one size so you may have to take some home like I did.

Kilt and Clover Irish Potato soup is like a puree, the consistency of soupy mashed potatoes with bits of bacon in it.

It was not what I expected, but it was splendid and certainly worth a try.

As for my main dish, I asked my waitress if I should have the Fish and Chips (which the owner talked about earlier in the meal) or the Shepherd’s Pie.

She suggested the fish and chips, so that is what I ordered, much to my dismay.

In general, it was excellent, but as someone who does not like tartar sauce, the batter was terribly bland even after squeezing some lemon over it and adding a bit of black pepper.

I have fish and chips pretty often, and this is an issue I have run into several times so by no means are these guys the only ones who do this.

I think if they added something to the recipe rather than it being just plain the fish and chips would be much better.

Personally, I would add Cajun seasoning, but I know it isn’t a Cajun joint so maybe some cayenne or paprika… toy around with some things until the fish stands on its own without sauce. 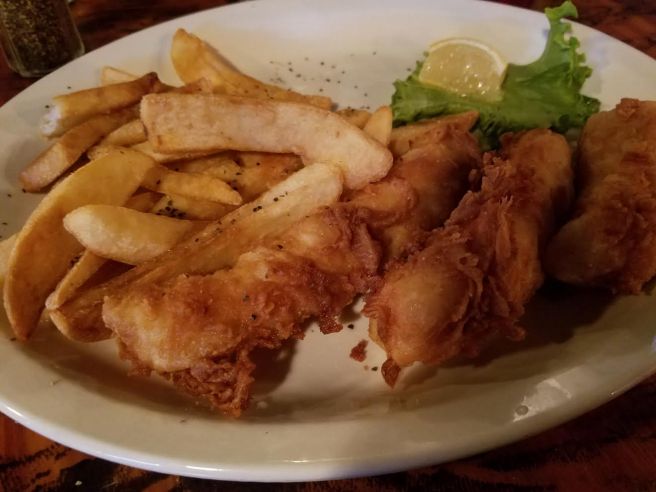 I will say they after they cooled off and I finished them off later in the day, it tasted much better though still a bit bland.

Dad had the Kilkenny burger, Swiss, mushrooms, onions and a whiskey dijon mustard and loved it along with having most of the scotch eggs.

I think it will be easy talking him into coming back the next time he is in town.

I loved my trip to Kilt and Clover, great wait staff, exquisite food, and only the Fish left something to be desired but again, I eat it without sauce so it may just be me.

Next time I am getting the Shepherds Pie a different soup and who knows what else, I want to try the whole menu, especially when they get some lamb.

Chop’s Guide Score 5/5 The fish wasn’t my favorite ever but every other aspect made up for it.