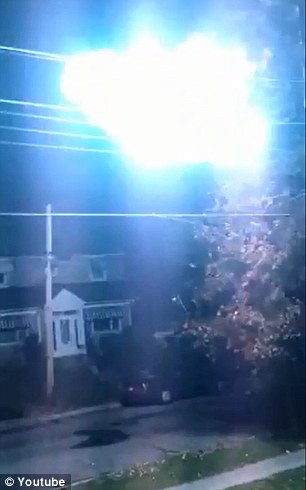 I got to see one of the cooler things I have ever seen today.

As I was trying to drive home from training for the new job, while simultaneously write my memoirs on my phone, read a newspaper, eat spaghetti and do my make-up, I saw a flash and thought my eyes were playing tricks on me (or I stabbed the make-up thingy in my eye).

Then I see it again, a bright flash.

There are two power lines touching and they are arcing off some SERIOUS flash and flame.

I was awesome, scary and kind of pretty all rolled into one.

It arced five or six more times before the power line broke and fell not only across four lanes of traffic but over a dump truck.

I called my good old Miller County Dispatch folk and let them know what was up. MCSD-D dispatched out Lake Ozark Fire for it. Missouri State Highway Patrol showed up while I was on the phone with MCSD, talk about Johnny on the spot!

I had to sit there waiting got a while but that was fine because I was only about 4 cars back so I got to see all the awesomeness and when the MSHP led us out of the area to relieve the traffic jam building up, I was one of the first ones out of there… I wish I would have been videoing or at least got some pictures to show the arcing but it takes a lot of concentration to look this good… and a ton of foundation.

I also swung by Lake Ozark Barber Co. today because I ran into some free time before training that I did not expect.

Tim was there so I figured why not tighten up my hair and get a hard part so I can make this new hair thing a little easier to do every day.

He tightened it more than I think it has ever been which, honestly, feels kind of cool being bald on the back and sides…

If head slapping was an instrument, I could make some money cause I have been slapping the bald back of my head for hours!

And honestly, the people who know me can vouch that at least I’m not touching myself inappropriately.

One small step for man, one giant leap for me not having a chaffed willy.

I was listening to Type O Negative while writing this and We Were Electrocute sounded like a good title for this post.