I know I just blasted parents a bit yesterday due to SpongeBob but I just do not get parents today.

This post came to mind during my duties as a dispatcher because we get a TON of, I’m a shitty parent and can’t handle my kid calls.

I partially blame the government for this.

You can’t do anything without DFS getting involved.

Spanking is not abuse.

I am all for trying different things to get a point across but sometimes you need a last resort or you end up with a society of entitled little fucktards.

Now do not let my next line make you think I am for abuse or anything but:

If your pre-pubescent child is biting you/hitting you/kicking you and rather than punting that little bastard across the room, you call 911, you have failed as a parent and it will never get any better.

That kid now knows you have absolutely no power.

You should send that kid off to military school or something because that kid is going to grow up to be a piece of shit otherwise.

I didn’t get nearly enough spankings as a kid but if I would have pulled some shit like these retards call dispatch with… my mom would have put my ass in a coma.

And I would have deserved it.

Spanking does not mean you do not love your child, exactly the opposite actually.

Every time my butt got whooped it was because I was doing something stupid and after it was over my mom or dad would talk about it with me, I knew I was loved, I also knew to avoid doing that again.

It may not have always worked the first time, but it worked.

eface this by saying that I am not a parent.

I’m not a Nazi either but I can see what they were doing was wrong.

I like the idea of being a parent but it just hasn’t happened.

Much to the dismay of my mom.

I tell her that I am going to try to make her a grandchild with a resident of every country in the world, then she calls me a man-whore.

There is no pleasing this woman.

On the flip side, both of my dads are ok with my plan.

If you are a good parent then I am not referring to you whatsoever. Even 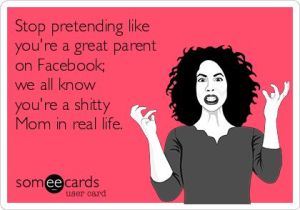 if you are a good parent because you knew that you were not going to be a good parent and so made the choice to let someone better suited be a parent, this is also not meant for you.

You made one of the hardest choices in the world and had the courage to say that you weren’t up to the task.

My childhood was not without its trials and tribulations but I lucked into three good parents.

And a good Nanny and Papa during the trials and whatnot.

But parents kill me nowadays.

If they are not using their kid as a fuck trophy that they can lord of over their baby daddy for prompt payments monthly then they are treating the kid as a burden.

And this is all in the off chance that they don’t hand off their kid to some family member and try to be part of the kid’s life when it is convenient for them, usually the kid’s grandparents.

We will get into all of this and I will try to not fly off on too many tangents.

I say baby-daddy because more often than not, it is the mother lording the kid over the father.

If the father isn’t a shit-bum who isn’t even in the picture.

This is due, in part to the fucked up justice system.

It is damn near impossible for the father to get custody of the child even if he doesn’t need child support.

Every father I know who has gotten custody does not receive a single dollar in child support which seems like a kind of fucked up double-standard.

I also think that the amount given for child support should be directly linked to how much time the outside parent is allowed to spend with the child.

If the parent is only allowed to spend one weekend a month with the child then at most the parent should only pay a quarter of what the child’s expenses should be.

Note that I sa 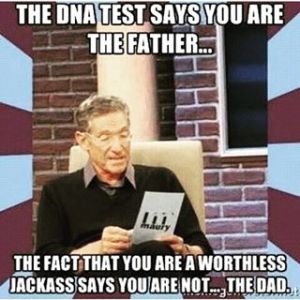 id “child’s expenses” because every dime that someone gets for child support should go to that child.

If you are out getting your nails or hair done on the extra income you receive then you should immediately be opted-out of receiving child support.

Honestly, I think instead of checks, the process should be you buying food and clothes for the kid and that is what you give them every month rather than money.

Paying for utilities or rent with some of it I understand but using it as your very own trust fund while that kid eats ramen noodles and bologna sandwiches pisses me off.

Let’s once again go back to my nephew, I wasn’t writing this because of him but when I think of shitty parents, I think of my nephew.

My nephew was raised by his grandparents.

He was also raised in a small part by myself and my brother Chris.

Both of his parents have treated him like shit his entire life.

Even with how he was treated, he always remained loyal to them whic

I give him a lot of shit but he is a good kid.

As he has gotten older he has realized he was not a priority in their lives and has started to act accordingly.

His father, who, until recently, would have been considered a saint compared to his mother, never made my nephew a priority and that continues to this day.

His whole life he has taken a back seat to everything.

as never seen the ocean ( I really hope to take him one day soon) but recently, his father went with his then girlfriend now wife on a trip to Hawaii with one of her kids.

My nephew wasn’t even thought about in this decision.

He will occasionally buy him something to show his love but he was rarely physically there to give it to him.

My pretty awesome nephew is just a burden to him.

His father is still up in North Dakota with his wife and her kids and the nephew hasn’t seen him for 2 years or so.

They talk on the phone occasionally, especially if my nephew goes over the data on his phone.

There has been talk of them moving back to Missouri and I really hope it doesn’t happen.

When his father is around, he starts trying to act like a father and is c

onstantly getting into it with the grandparents who are the actual parents of this kid.

That and the nephew and his father are both exactly alike for having spent so little time together and they argue constantly which gets annoying pretty fast.

We have a big house and the nephew lives with Chris and I. I assume if they moved back, at least temporarily they would be staying with us and I think I would be moving out dealing with them together.

Now, if you can imagine someone being worse of a parent than the nephew’s father… it would be his mother.

I don’t have as many stories about her because I wasn’t around her with some these things happening but when the nephew was pretty young we all moved from Southeast Missouri to around Jefferson City (Central), Missouri. 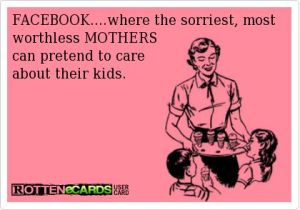 mom did not come with us, of course.

He would try to talk to her on the phone or go see her all the time but it was never a good time because someone was sick or whatever excuse she could come up with.

And almost always, during the time that he was trying to see her, she would post pics on Facebooks of all the things her man and his kids or nieces and nephews were doing.

Kind of a slap in the face to the kid who just wants to be loved by his parents.

Recently she took my nephew’s half-brother and his fiance on a trip to Florida, guess who wasn’t invited.

The boy knows that he is loved but at the same time struggles with why the two people are supposed to care about him most in the world can barely be bothered to allow him to talk to them on the phone, much less see them.

Kid’s are a pain in the ass but they should not be a burden.

The decision on if you should either go out and party and get hammered every weekend or spend the night hanging out with your kid shouldn’t even be a decision.

You have to have some adult time, and taking some doesn’t put you in the same boats as the degenerates I have listed so far in this post.

It is when your kid continually becomes the second choice that you become one of the twatwaffles mentioned above.

There are THOUSANDS of people who would love to be a parent to your neglected child (sometimes even the other parent), maybe you should give them a shot at it instead of ruining your kid like you have ruined yourself.

If at any point in this post, you became offended, maybe you need to reevaluate your life and adjust some shit.

Your kid deserves it.

And the world deserves not to have to deal with the shit-bum you sprang from your loins.

Give the world something you aren’t… useful.

Read to your kid.

Play board games with your kid.

Don’t use your kid as a chess piece.

Sign them up for lessons, in anything (karate, dance, cello, drums), if you can’t afford lessons, set up a gofundme page and people will help you pay for the lessons.

Stop letting your kid walk all over you.

STOP CALLING 911 TO BE THE PARENT OF THE PRODUCT OF YOUR BAD CHOICES!

2 thoughts on “Parenting: What You’re Doing Wrong. If You’re a Shit Parent.”